Beef or pork? Sauce or dry rub? With an array of sides or loaded on a sandwich? The art of barbecue varies from region to region, but with Omni hotels across the country we’ve got you covered for smoked meats no matter your preference. Learn more about barbecue’s local flare from Omni Chefs, and then try out their techniques yourself.

“Having grown up in South Carolina, I am inherently biased towards pork barbecue. A simply seasoned pork shoulder rubbed with salt, pepper, garlic and a little cayenne, turns into the most beautiful, tender,  juicy thing with the right touch. While I can certainly appreciate, and regularly enjoy brisket, I don’t have the same affinity for it as native Texas chefs that’s for sure.”

To make the perfect Carolina-style pork like Chef Cameron, cook the meat low and slow over hickory wood to promote its strong flavors. Chef recommends smoking until the internal temperature hits about 225 degrees, which takes about 12 hours. To enjoy, dip it in a thin, tangy sauce made with a heavy dose of apple cider vinegar.

Method: Bring ingredients to a boil, and then simmer for 15 minutes until reduced. Strain through a fine-mesh strainer and serve along side pork.

Chef Cameron perfectly marries San Antonio’s two most popular cuisines; Tex-Mex and BBQ in a delicious smoked brisket quesadilla created in just three easy steps. First, smoke brisket for about 24 hours until its fall-apart tender. Them, shred it and fold it into a flour tortilla with copious amounts of cheddar, jack and Cotija cheese. Lastly, top it with sweet roasted onions, bell peppers and crisp it on the griddle.

Chef Travis focuses on simplicity in his barbecue so there’s more time to spend with family and friends.

“Bottom line, Tennessee has some of the best barbecue across the country because we focus on keeping things simple and delicious. There’s really no secret to making great barbecue, just start with a good quality protein and a simple rub, then let the hickory wood do the rest of the work.”

To re-create the pulled pork sandwich from Barlines, start with a bone-in shoulder and prepare it with the rub a day in advance so that it sticks to the pork and creates a nice bark. Smoke the pork in a pan so it stays moist during the entire 15-hour cook time. In the meantime, you can prepare sides like baked beans and coleslaw. The sandwich is served on a toasted brioche bun with slaw and a sweet tomato-based sauce that compliments the melt in your mouth meat. Be careful not to shred the pork too finely so that the sandwich has a nice texture. Make it fun for a crowd by serving the barbecue on a platter with a few different sauces, pickles and buns so that everyone can build their own sandwich the way they like it. 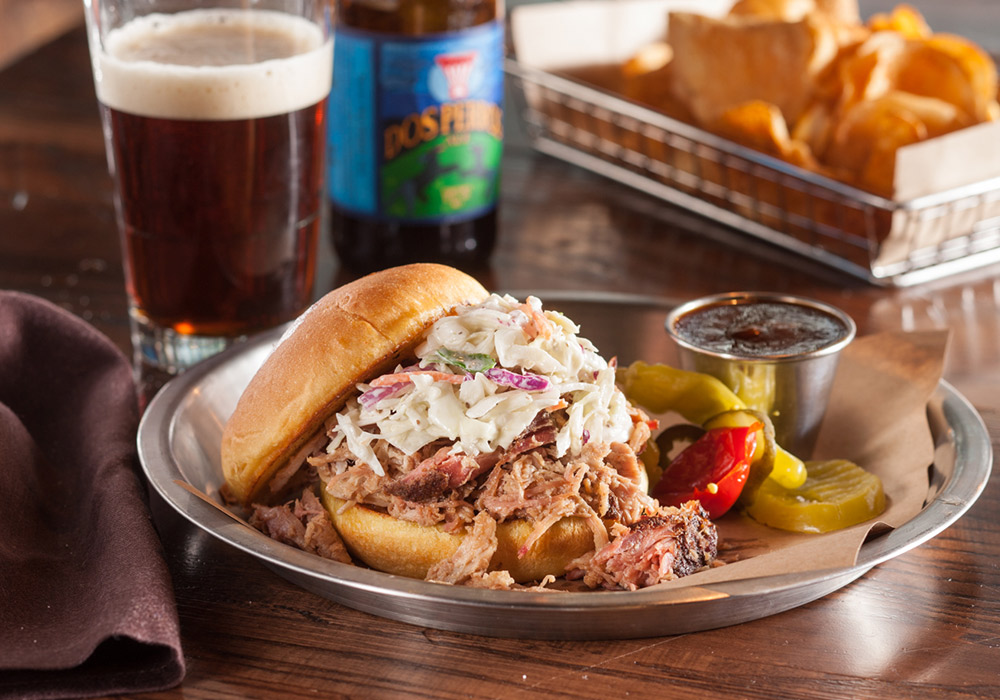 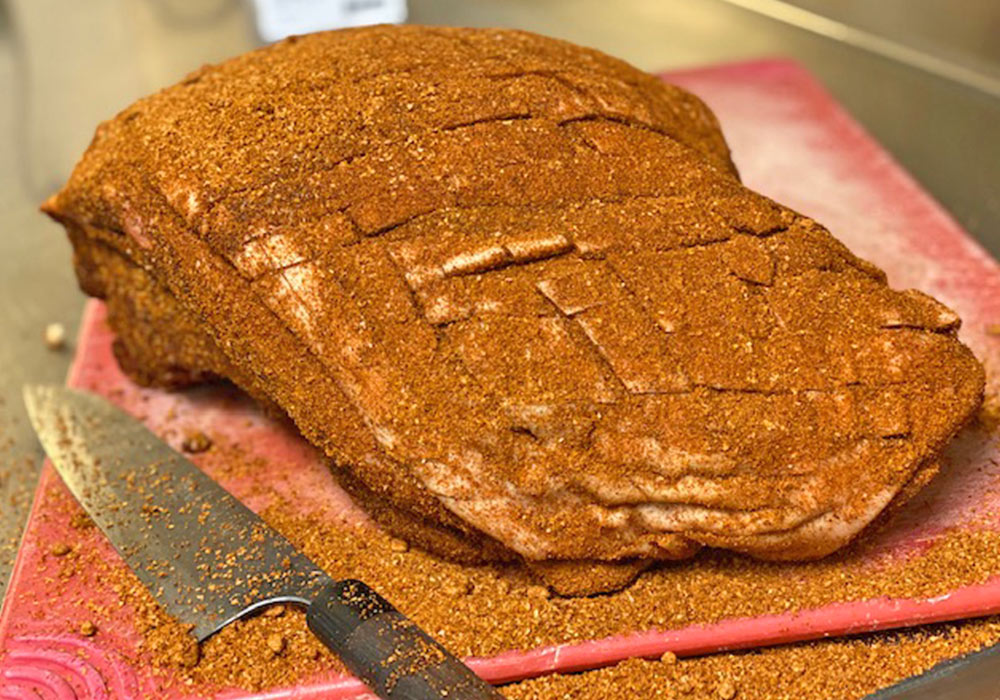 “Growing up in Texas means I prefer the Texas-style over the others. The slow-smoked brisket over post oak or mesquite wood gives the meat a bolder, richer flavor. I prefer my meats with a dry rub, but I do like sauce on the side to compliment the meat.”

At Neighborhood Services, located inside Omni Frisco Hotel, Chef Marcus cooks up pork that will impress even die-hard brisket fanatics.

“Smoked pork butts are one of my favorite barbecued meats, and great to serve on nachos. Dry rub the butts and cook until it reaches an internal temperature of 175 degrees. Then baste it with a traditional pork finishing sauce featuring apple cider, and continue to cook until 205 degrees. After letting it rest, it will easily pull apart with bear claws.”

And when it comes to ribs, Chef Marcus appreciates the tender, meaty ribs of Kansas City.

“Texas ribs are more fall-off-the-bone-style verses the Kansas City style ones where the meat has to be tender and hold teeth marks. I call it a rib with a little bite, as they are tender and need just a little tug. I make them using pork loin back ribs to take advantage of the extra meat.”

With mesquite and apple wood in the smoker, it should only take about six hours for the ribs to come out in true Kansas City form. To complement the heat from the spicy rub, glaze with equal parts butter and brown sugar. Serve the ribs alongside fries, malt vinegar slaw and a pickled onion.

Method: Blend spices and apply to meat 15 to 60 minutes prior to cooking. Rub the blend vigorously on the entire outer surface of the meat. 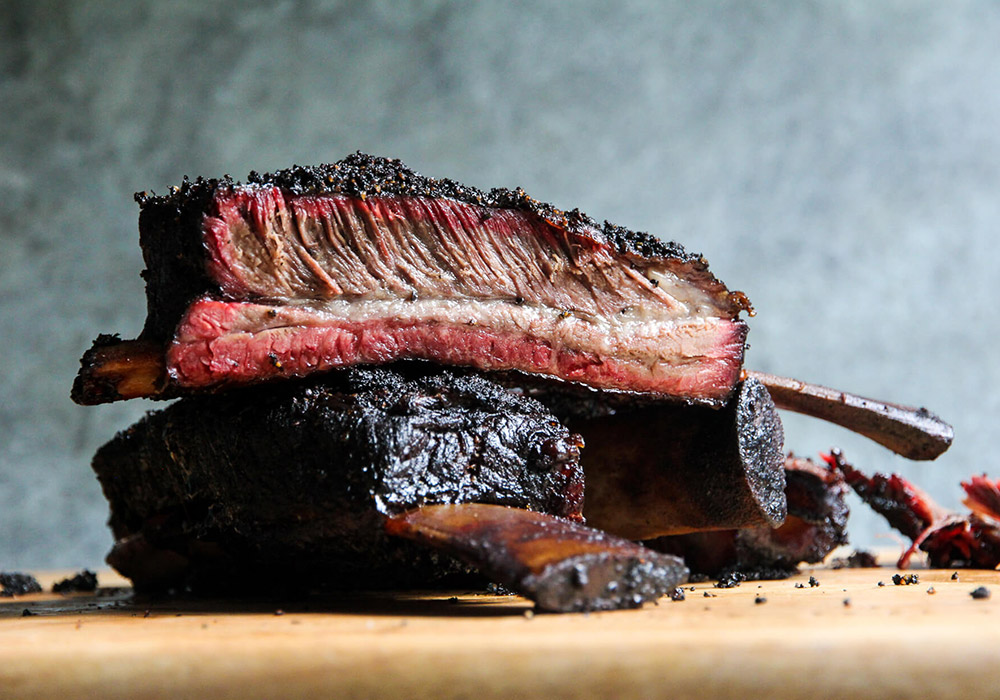 Way down in Central Texas, surrounded by some of the most famous BBQ joints in the state (or maybe even the world), Omni Barton Creek Resort’s chefs maintain the standard with their own barbecue specialties. The Texas style, founded by European immigrant meat packers, consists of simply seasoned beef with salt and black pepper before cooking indirectly over pecan, oak, or mesquite wood. It’s widely considered in Texas that the sauce is unnecessary but it may be served on the side.

“At Omni Barton Creek Resort, we elevate the classic Central Texas-style with special ingredients and proteins for our resort guests. For example, we serve our barbecue alongside a locally sourced espresso BBQ sauce, local honey smoked salmon and our giant beef rib. We also enjoy smoking vegetables and local cheddar cheese.” 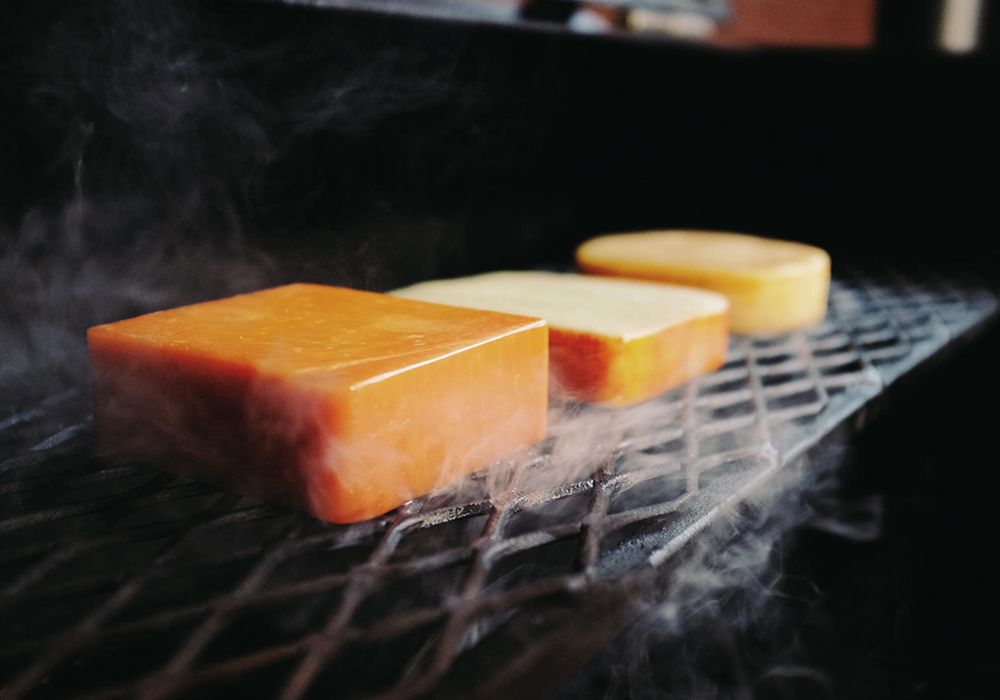 For avid barbecue fans, the Central Texas BBQ Trail consists of pit-styled BBQ joints within an hour’s drive of the resort. Texans enjoy cafeteria-style dining served by a butcher who carves the meat by the pound. The hardest part is leaving room for the sides and desserts.

Method: Pat dry meat and sprinkle mixture onto the meat. Use your hands to rub spices into the meat up to 12 hours before cooking.

With so many flavors and styles, it’s no wonder barbecue is a go-to across the country. Now that you know the secrets, make the most of the rest of summer and try some of these recipes for yourself.