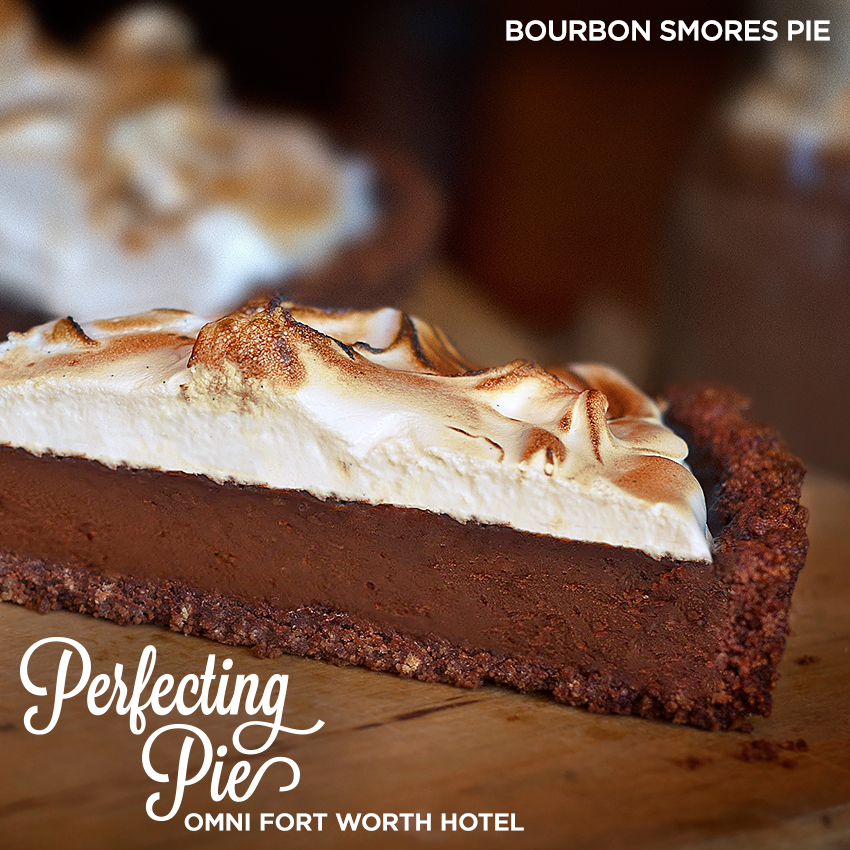 Share:
When Omni Fort Worth‘s Chef Sebastien Layen was a young chef he worked in a hotel that the pastry chef had a killer chocolate pie. He remembered eating a lot of slices and loved it so much that he asked the chef for his recipe when he left. As a chef, Chef Layen used that recipe many times but when he moved to Texas, he wanted to modify the pie and make it more local. Chef Layen’s former catering director was a big s’mores fan and wanted it everywhere. Chef Layen thought about the pie and thought that he should modify it with all the flavor of a s’more. He replaced the pie crust with the graham cracker crust, added bourbon in the chocolate pie filling, then replaced the whipped cream with a homemade marshmallow cream, creating the Bourbon S’mores Pie. (More “Perfecting Pie” Recipes)
Join Omni on Pinterest and Instagram!

The Crust: 1/2 cups Graham cracker crumbs 2 Tbsp Sugar 1 Egg white, beaten 2 Tbsp Butter, melted 1. Preheat oven to 375 degrees. 2. In a small bowl, combine cracker crumbs and sugar, stir in egg white and butter. 3. Press onto bottom and up the sides of a 9-inch pie plate coated with cooking spray. 4. Bake 6-8 minutes or until set. Cool completely on a wire rack. The Filling: 9 oz High-quality semi-sweet chocolate, chopped 1 1/2 Whole milk 1 cup Heavy cream 6 Egg yolks, large 5 Tbsp Granulated sugar (add an extra tablespoon if using bitter chocolate) 1/4 tsp Salt 1 Tbsp Bourbon 1. Place the chocolate in a blender. 2. Whisk the milk, cream, egg yolks, granulated sugar, bourbon and salt in a heavy-bottomed medium saucepan over medium heat. Cook, stirring constantly with a heatproof spatula until the mixture is thick enough to coat the spatula and almost boiling (5-6 minutes). 3. Immediately pour the milk mixture over the chocolate in the blender.Cover and hold lid with a thick kitchen towel. Blend until combined and smooth, stopping to scrape down the sides of the blender as needed. 4. Pour the chocolate mixture into the graham cracker pie crust and refrigerate until set, about 2 hours. The Topping: 6 Tbsp Water 1 1/4 cups Light corn syrup 3/4 cup plus 1 Tbsp Sugar 4 Egg whites, large Pinch of Salt Pinch of Cream of tartar 2 Tbsp Vanilla extract 1. In a small saucepan fitted with a candy thermometer, bring the water, corn syrup and 3/4 cup sugar to 246 degrees. 2. In the meantime, in a completely dry mixing bowl with an electric mixer, whisk the egg whites, salt and cream of tartar until creamy and foamy, about 2 minutes. 3. Still whisking, sprinkle in remaining 1 tablespoon of sugar and continue to whisk until the whites hold very soft peaks, about 2 minutes. 4. While mixing on low speed, carefully drizzle in the hot syrup. 5. Turn the mixer to high and whisk until thick, fluffy and just warm, about 7 minutes. 6. Turn the mixer to low and whisk in vanilla. 7. Pour marshmallow cream on top of pie filling. Add mini marshmallows then broil or use hand torch to toast the marshmallows.