Fans of Washington DC’s Omni Shoreham Hotel know that the hotel, built in 1930, has been host to multiple presidents, heads of state, celebrities and more. Most famously, the hotel was the landing place for the Beatles when they first visited the United States back in 1964.

But historians also agree the hotel was also part of a pivotal moment in the nation’s military history: the Navy SEALs were spawned at the Omni Shoreham Hotel.

In November 2016 the hotel is planning a ceremony and plaque dedication in the Empire Ballroom (where the pool was formerly located) on the 74th anniversary of the Navy SEALs. 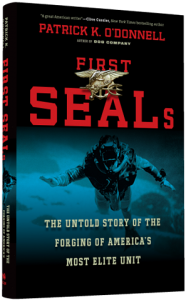 At the intersection of Connecticut Avenue and Calvert Street in Washington, D.C., stands the well-appointed Shoreham Hotel. Built in 1930, the impressive art deco structure boasts 832 luxurious guest rooms, several elegantly furnished ballrooms, high-ceilinged dining rooms, and a sumptuous lobby illuminated by a host of glittering chandeliers. The hotel features nearly every amenity a discerning traveler or even a president could desire. At the behest of Franklin D. Roosevelt’s staff, the hotel quietly added a special ramp and elevator to accommodate the president’s wheelchair, allowing the Shoreham to serve as the venue for FDR’s first inaugural ball and host inauguration galas for every subsequent president throughout the twentieth century.

The Shoreham has had more guests and hosted more functions than history has recorded, but on the evening of November 18, 1942, a small group of men gathered at the hotel to engage in an activity that would directly and substantially influence the evolution of America’s military. They came not to stay in one of the suites or to eat in the dining room or even to relax with a drink in one of its lobbies. Instead, they gathered around the hotel’s expansive indoor pool, which at the time was one of the largest in Washington, D.C.

On that cold November night, Jack Taylor was gearing up for the evening’s demonstration while guards posted at the pool doors turned away any guests who came down to enjoy a swim. A renowned Hollywood dentist, Taylor put his livelihood on hold during World War II to serve his country. He was an avid swimmer and lifelong adventurer who had a penchant for racing yachts, sailing solo halfway around the world, and flying airplanes. An ultimate survivor, he once escaped from an Alaska gold mine after being trapped for two days following an earthquake. After Pearl Harbor, Taylor volunteered for the U.S. Navy, which initially relegated him to a dull dental position on a ship. Later, the highly secretive Office of Strategic Services (OSS) sought to recruit him, and Jack enthusiastically volunteered to join its ranks.

This swim was unlike any other in Taylor’s lifetime. He dipped his toes into the 60-plus degree water and put on a face mask, carefully checking the hoses and buckles of the newly invented Lambertsen Amphibious Respiratory Unit (LARU), a breakthrough underwater breathing device that was a precursor to SCUBA (self-contained underwater breathing apparatus). Initially constructed in the inventor’s garage from an old World War I gas mask and a bicycle pump, the LARU was the first closed-circuit rebreathing device that would be used in American military underwater operations. That night at the Shoreham pool, America would finally have a device that would enable it to compete with the Axis powers’ much more advanced and sophisticated underwater military operations. The LARU provided the technology America needed to pioneer the formation of an elite and highly effective American commando unit that would ultimately do it all: sea, air, and land operations.

Taylor secured the oxygen tank and scrubber, then plunged into the pool. The water enveloped his body as he remained submerged, breathing with the assistance of the LARU, swimming one lap after another. Normally exhalation underwater would cause a stream of air bubbles—a telltale trace that could reveal the presence of any diver. Any sign of bubbles remained absent as Taylor’s audience watched him swim without coming up for air.

The small retinue of men present for the testing included the device’s inventor, twenty-five-year-old Christian Lambertsen, a medical student. In the coming months, Lambertsen would covertly engage in testing and development of the LARU, traveling back and forth to Washington, D.C., from Philadelphia, where he attended the University of Pennsylvania’s Medical School. Sworn to secrecy, he couldn’t tell anyone—not even the school dean—the true reason for his trips.

Standing next to Lambertsen was British officer Commander H. G. A. Woolley of the Royal Navy, on loan to the OSS. Recently Woolley had been serving on the personal staff of the British Chief of Combined Operations and the British Joint Staff Mission in Washington, D.C. General William J. Donovan personally chose him to “assist in the study of British methods of training operatives and raiding forces.” Prior to the war, Woolley lived in Hollywood, where he was a successful scriptwriter for several major studios. It is likely Taylor and Wooley ran in the same circles and were friends before the war. The bearded World War I veteran possessed the dynamic transformative leadership capabilities that could take an idea and develop it into a new form of warfare. With very few resources, he quickly built a new organization that would reshape intelligence gathering and warfare for generations to come.

On that cold November night, Taylor, Woolley, and Lambertsen made history. Their successful experiment in the Shoreham’s pool spawned the beginnings of one of America’s most elite military units—the U.S. Navy SEALs.