The incredible art displayed throughout the Omni Nashville Hotel is one of the most talked about features of this new property. The thought that went behind the art selection is obvious. Omni partnered with design firm Looney & Associates and art consultants including Soho Myriad who spent the better part of a year hunting for talented, local artists or artists whose work was inspired by the Music City and its roots. The goal was to find pieces that evoke a sense of “urban elegance with a vintage touch” when you walk through the doors of Omni Nashville Hotel.

The presence of local flavor is apparent in each piece, accomplishing the desire to represent the raw and honest character of the city. The sculptures, paintings and mixed media pieces are not only grand in size, but each one is sure to make you stop in your tracks in wonderment.

For instance, artist Matt McConnell’s “Rhythm” wall sculpture, which is 120×168” in size, protrudes from an expansive wall near the entryway to the second floor ballroom. Its magnitude can be seen from the streets through floor-to-ceiling windows. The installment is made up of two strands of 40 feet of undulating piping that is strung through various sizes of donated AAX Sabian cymbals. The artist wanted to create a physical representation of sound waves and music tracks. Moving from small cymbals to large cymbals, the piece looks like music beats going thump, thump, thump. Its ties to the Music City are palpable. 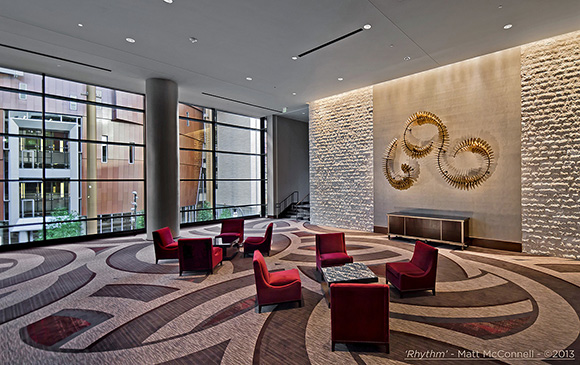 Inspired by the ostentatious, western style of the famed tailor Nudie Cohn, nationally recognized mixed media artist Dolan Geiman constructed a “Nudie Suit Series” – five panels comprising of salvaged wood, found objects, and other recycled materials that he collected from visiting people on the back roads of Nashville and surrounding areas. The images he depicts in the series are a combination of the iconic shapes seen on Nudie Suits, with Southern motifs like the horseshoe and the tulip, and designs Geiman came up with on his own. While clearly influenced by the legendary Nudie Suits, Geiman infuses his own style and interpretations that give the piece a special flare.

Ron Porter’s “Decoys” is a piece that simply cannot be missed. The oil painting depicts the back of two semi-trucks driving through a muddy field, with two delicate swans swimming in a small body of water left by a heavy rain. Porter, who lives and works in Nashville and teaches drawing and painting at Vanderbilt University, is fascinated by the backs of trucks that you see on the road. Because these large moving objects are so familiar and so much a part of our everyday, American culture, he believes that no one truly “sees” them anymore. Porter began to notice the nuances and varieties of trucks, and his decision to pair the trucks with the swans in this particular piece changes the meaning of both objects completely. It is an odd relationship. “Decoys” is a must-see and often invites intrigued stares.

Another piece that finds beauty in the ordinary is “At Home in Any Room” by Mary Rogers Horton. Located in the entrance to the hotel’s signature restaurant Kitchen Notes, the mixed media collage portrays rows and rows of different chairs facing all different directions. Rogers Horton, who lives and works in Nashville, took photos of chairs from catalogues and pieced them together into a fascinating display. She believes that there is something beautiful, yet also alarming, about objects in large numbers. Catalogues try and sell an item as a “one of a kind,” but the multiplicity illustrated in this piece suggests otherwise.

The blending of both past and present is common throughout the hotel Artist Hollie Chastain’s collages mark the entrance to the hotel’s bar and music venue Barlines. The six featured pieces were commissioned to reflect notable Southern and Country icons. The faces of Dolly Parton, Johnny Cash, Hank Williams, Loretta Lynn, Willie Nelson and Patsy Cline pop out from a collaged background of bright colors and pages torn from old school books. The books that Chastain sourced – mostly from the 40s and 50s – come from the Nashville area and have sturdiness to them and a vintage look that intrigues her. Pages that are faded, banged up, torn up and doodled on attract her the most. It is interesting to watch a new band onstage in Barlines with Country music’s greatest looking down on you from the walls. 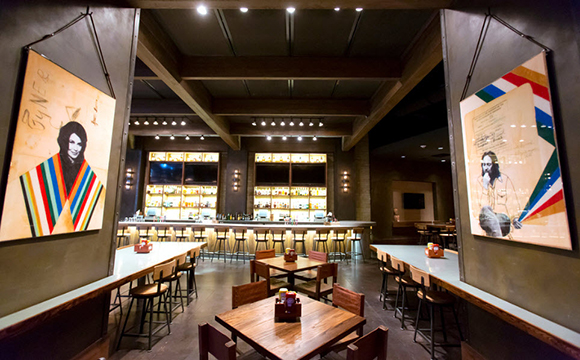 Many of the artists commissioned to produce art incorporate materials from the surrounding area. Artist Herb Williams, who is intrigued by the idea of bringing nature to the urban jungle, often includes birds in his work. With “Call of the Wild Series,” he created five panels with four Tennessee songbirds on each panel that were each hand cut and hand painted. The silhouette of each song bird is embellished with an over layer of album covers – showcasing native musicians and music that is referential to Tennessee. For Williams, the piece represents nature communicating to us through a spectrum of colors.

Each Omni Hotels & Resorts property is distinct and features elements that speak to the uniqueness of each destination. This theme can be seen throughout Omni Nashville Hotel in its design, culinary offerings and, of course, its impressive art collection. A dedicated eye toward bringing in local culture and flavor is evident and everywhere.