(Updated October 2020) Get ready to plan an unusual trip to one of these haunted hotels. Did you know that some of your favorite Omni Hotels & Resorts have unique histories featuring guests from the other side. In fact, four of the hotels made the Historic Hotels of America Top 25 Most Haunted Historic Hotels list. Here’s the inside scoop on some of our spookiest hotels.

In an effort to prevent making a haunted hotels list, and as a part of Italian tradition and superstition, the artisans and laborers who built Mount Washington Hotel varied the number of steps to the second floor to confuse ghosts in the hotel. But, the stairs haven’t confused one ghost in particular. The hauntings of Carolyn Stickney, the widowed bride of the Mount Washington Hotel’s owner, has even caught the attention of Sci-Fi’s Ghost Hunters.

Carolyn Stickney became known as “the Princess” after marrying French royal, Prince Jean Baptiste Marie de Faucigny Lucinge. She played a principal role in the development of the hotel, visited the hotel season every year and often hosted extravagant parties in her own private dining room, now called the Princess Lounge. After her death in 1936, caretakers and managers prowling the property during the hotel’s vacant winter months reported catching glimpses of the Princess descending the stairs for dinner.

The Princess often returns to a third-floor guest room at Omni Mount Washington Hotel where her four-poster maple bed still resides. Several guests of her room have reported awaking to find a woman sitting at the end of the bed brushing her hair.

Even more, a woman in the window of the Princess’s room shockingly appeared in the background of an employee group photo in front of the hotel’s veranda.

The Jilted Bride of The Omni Homestead Resort 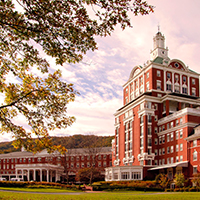 Built in 1766, The Omni Homestead Resort is the oldest resorts in America and made the list of haunted hotels. Part of its long history includes  mysterious tales like the tale of the bride that haunts the 14th floor.

In the early 1900s, a nervous husband-to-be had second thoughts on his resort wedding and left his young bride sitting in her room. The bride was distraught and took her own life. Today, legend says that her spirit roams the resort’s 14th floor and asks guests and staff for the time…still waiting for her groom to return. 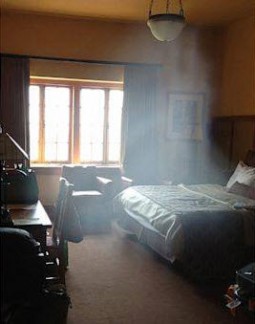 There’s a sad but gentle ghost residing within the grey granite walls of Ashville’s historic gem, The Omni Grove Park Inn. Known as the “Pink Lady”, guests and employees have seen, felt and experienced her for more than a half-century.

Until recently, the Pink Lady amounted to just a swirl of stories and recollections about a young woman, dressed in pink, who fell to her death in the Palm Court atrium around 1920. However, many dismissed these tales as mere rumors.

Early 1996, the resort conducted research on the Pink Lady phenomenon. Joshua P. Warren of Asheville, an expert and author on local ghostly phenomena (Haunted Asheville), spent months in the haunted hotel collecting data. He looked into available public records and interviewed nearly 50 people. After evaluating his research, he concluded that the Pink Lady is more than a collection of tall tales.

Although she spends time in a number of places around the resort, evidence honed in on a single Main Inn guest room, 545. A painter who worked in the hotel from the 1950s through the 1980s told this story:

“Back in the late ’50s or early ’60s, the hotel used to shut down during the winter months, and that’s when we caught up on painting. One cloudy, gloomy day back then, I was checking on some of the guys’ work. As I got closer to 545, I got cold chills that got worse the closer I came to the door. It got so bad, I couldn’t work up the courage to go in at all. In fact, to my last day at the hotel, I never did go back there; sent my boys in instead.”

The hotel’s Engineering Facilities Manager had a similar experience with the same room more than three decades later:

“One day in early 1995 I was on my way to check a recent bathtub resurfacing in room 545. As I approached the room, my hair suddenly lifted from my scalp and stood on end on my arms. Simultaneously, I felt a very uncomfortable, cold rush across my whole body. I didn’t go in, haven’t gone back and don’t ever intend to.”

Neither the painter nor the Engineering Facilities Manager knew of each other’s experience or about room 545’s connection to the Pink Lady.

More Stories from the Main Inn

Stories continued from the two-year-old son of a Florida college professor who asked, “Who was that nice lady?” and “Where did the nice lady go?” after naps on consecutive afternoons in an empty Main Inn guest room.

Or, the manager of Elaine’s, the resort’s nightclub, who saw the Pink Lady several times describing it as “a real dense smoke, a pinkish pastel that just flows.”

A former chief of police swears somebody sat down next to him on his Main Inn guest room bed while he was making a telephone call home.

One winter after the resort closed for the season, two employees witnessed all the sixth-floor guest room lights come on, suddenly turn off, then followed by all the Main Inn lights doing the same thing.

The president of the National Federation of Press Women experienced several unexplainable events in her Main Inn guest room, topped off by two incidents of middle-of-the-night toe tickling.

Finally, one New Year’s Eve two employees saw a woman pass through the accounting office. They said, “We heard someone come in the back door. We looked up and she went by real fast a woman dressed in party clothes. We thought it was a guest, so we got up to help her. Then she was gone.” 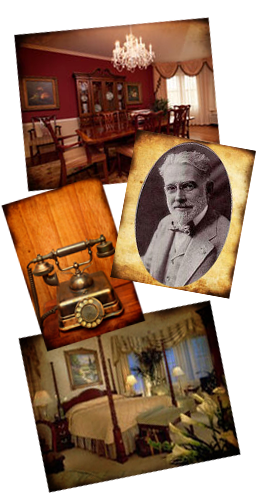 In 1930, when Omni Shoreham Hotel in Washington D.C. first opened, the owner, Mr. Harry Bralove, the minority shareholder, Mr. Henry Doherty and their families lived in the hotel. The Executive Housekeeper, Ms. Juliette Brown also stayed in hotel and took care of the families.

Early one morning, Juliette woke up not feeling well and reached for the phone. As she picked up the receiver she suddenly died of natural causes. The Doherty’s adopted daughter, Helen also mysteriously died in the suite. While no one was ever clear on how it happened, rumors abounded of suicide or a drug overdose .

By the time the Doherty’s family moved out of the suite in 1973, the area was closed and basically condemned. The once beautiful rooms adorned with Persian rugs, beautiful furniture and art now contain holes in the ceiling.

Once the Doherty’s left, strange things occurred in and around their guestrooms and in the wing that surrounded the suite. Televisions and lights would suddenly turn on, housekeeping carts would move on their own and guests reported strange breezes. Records from 1975 report that a guest staying in room 863 called to complain of noise in the evenings. Of course, there was no one in the room next door. The hotel employees named the ghost “Vivica” but who knows if it’s Juliette or Helen who makes this hotel one of the haunted hotels.

Today, the wing has been fully re-designed and restored. This suite of rooms is now a Presidential Suite, named appropriately, The Ghost Suite, and offers the most spectacular views of the city. 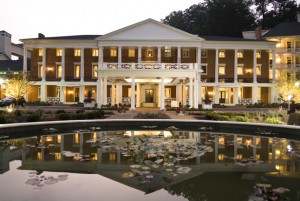 Legend has it that there are several ghostly spirits lurking in the historic Omni Bedford Springs Resort in Bedford Springs, Pennsylvania. The resort’s rich history accounts for the paranormal activity. Built in 1796, the resort has hosted several U.S. Presidents and dignitaries, and the resort’s former grounds were sacred healing grounds of Iroquois and Shawnee tribes.

Many travelers claim ghostly encounters with spirits of past soldiers and small children who often creep into vacation pictures. And some of the resort’s employees have witnessed a ghost who sits in one of the cubicles in the reservations office that types heavily on one of the computer’s keyboards.

The Ghost of Harvey Parker

Omni Parker House’s namesake, Harvey D. Parker built the historic hotel in 1854 on School Street in the heart of Boston. While he has long-since passed, he hasn’t gone far. Employees and guests have spotted Mr. Parker wandering the halls of his own hotel, likely checking up on the day-to-day operations.

“I first heard about the ghost of Harvey Parker when I began working here in 1941,” explained longtime Omni Parker House bellman, John Brehm. “They used to say he roamed the halls on the tenth-floor annex. There were many stories, but one in particular happened around 1950. An elderly woman guest insisted she saw an apparition outside room 1078. At first, it was a misty apparition in the air, then it turned toward her. She said it was a heavyset older man with a black mustache. He just looked at her, then faded away. She came downstairs, a bit jittery, and security went up to the tenth floor. They checked it out, but reported they could find nothing.”

On another occasion, a mother and daughter stayed in room 1012 and awoke to find a gentleman standing at the end of her bed. The gentleman sported a large grin as if he was asking, “Are you enjoying your stay?”, and when she smiled back the man gracefully disappeared. It surprised them to find the portrait of her visitor in the dining room. It was the portrait of Harvey Parker.

To those who knew Harvey Parker, these accounts hardly come as a shock. As a perfectionist who kept his hands in every detail of his restaurant and hotel operations, it would seem that he could never really bring himself to leave.

Elevators often open on the third floor without a guest calling or waiting.

A security officer reported one evening he saw the shadow of a man on the wall in the Bosworth section of the hotel. When he stepped aside to let the man pass there was no one there but its shadow wore a stovepipe hat.

In a room on the 10th floor, guests report the sound of a rocking chair that kept them up all night, but the hotel doesn’t have rocking chairs.

Bellmen have reported bright orbs of light floating down the corridor on the 10th floor.

Even if staying in one of these haunted hotels isn’t exactly what you had in mind. Rest assured that the friendly associates and luxurious accommodations at any Omni hotel or resort will make up for any unusual occurrences. Plan your stay today at OmniHotels.com