Modern-day food halls are quickly spreading across America. Evolving from the fast-growing food truck trend, modern-day food halls have suddenly started taking on a life of their own. Food halls, with the best of a city’s culinary vendors, are opening in nearly every major urban center in America at a pace that’s almost too rapid to chronicle.

Food halls are not a new concept. They’ve enjoyed great success in Europe. Even in the United States, noted establishments such as the West Side Market in Cleveland and Grand Central Market in Los Angeles have been serving up local eats for nearly a century.

But unlike historic markets, the new food halls are about creative, culinary excellence in an aesthetically hip and vibrant space—a win for both guests and vendors.

“There’s a synergy there,” says Michael Phillips, president of Jamestown, the company that developed the new Ponce City Market in Atlanta. “Food halls provide the opportunity for chefs who may prefer to avoid the expense or commitment of a full restaurant for the opportunity to experiment.”

Plus, says Phillips, food halls give guests a great way to interact directly with the makers. “Food brings people together, and the open spaces of food halls thrive when visitors can mingle and enjoy the food together,” he says.

For Adam Saper, chief financial officer and managing partner of Eataly, the success of the modern-day food hall is due in large part to what he calls the “theater of food.”

“When people cook for you, it tastes better,” Saper says. “If you see your food being made, it’s a better experience.” He also says that food halls offer a return to the old world that just resonates with customers.

Here are a few food halls worth visiting on your next vacation.

Most trace the start of this new food hall trend back to 2010 in New York City with the opening of Eataly, an enormous Italian food market that also houses several vendors. But this founding father of the U.S. food hall movement got his start in Torino, Italy.

Founder and creator Oscar Farinetti opened his 30,000-square-foot marketplace in Torino with the intention of providing high-quality Italian food at fair prices in a collaborative environment.

When traveling to Italy, brothers Adam and Alex Saper fell in love with the concept and wanted to bring it home to share with their fellow New Yorkers. They spoke with Farinetti about expanding to the United States, and then eventually approached and partnered with Joe and Lidia Bastianich and Mario Batali of Batali & Bastianich Hospitality Group to bring the idea to life.

At its core, Eataly is an extensive market selling high-end Italian products. But it is also home to Caffè Lavazza, with stands that sell everything from gelato to fresh meat and fish to pizza and pasta. There are also a number of full-service restaurants.

“What distinguishes Eataly is the retail,” Saper says. “Here you can eat, and then you can shop. We always see people stopping in for something to eat and then picking up items to take home with them.”

The concept has clearly resonated; Eataly now has nearly 30 sites throughout the world, including three in North America. With the success of its original Flatiron District location, Eataly went on to open to great fanfare in Chicago in 2013.

Earlier this year it opened its third U.S. outpost and second New York City location at 4 World Trade Center. Eataly also has plans to open a site in Boston’s Prudential Center and is planning to expand west with a location in Los Angeles’ Century City neighborhood next year.

Despite its global presence, which also includes locations in Japan, Dubai, Istanbul and Brazil, you shouldn’t expect a cookie-cutter experience at each location.

“Each Eataly is different,” Saper says. “Each one has distinct features. In Boston and Los Angeles, we’re partnering with some local chefs who will introduce brand-new concepts.”

Atlanta is among the latest cities to embrace the food hall trend. The concept established a firm toehold with the opening of Ponce City Market last year.

“Ponce City Market isn’t only a food hall, it’s a community hub with apartments, retail, offices and a rooftop amusement park,” Phillips says. “We open directly onto
the Atlanta BeltLine, a popular former rail corridor that now serves as a trail connecting neighborhoods throughout the city.” 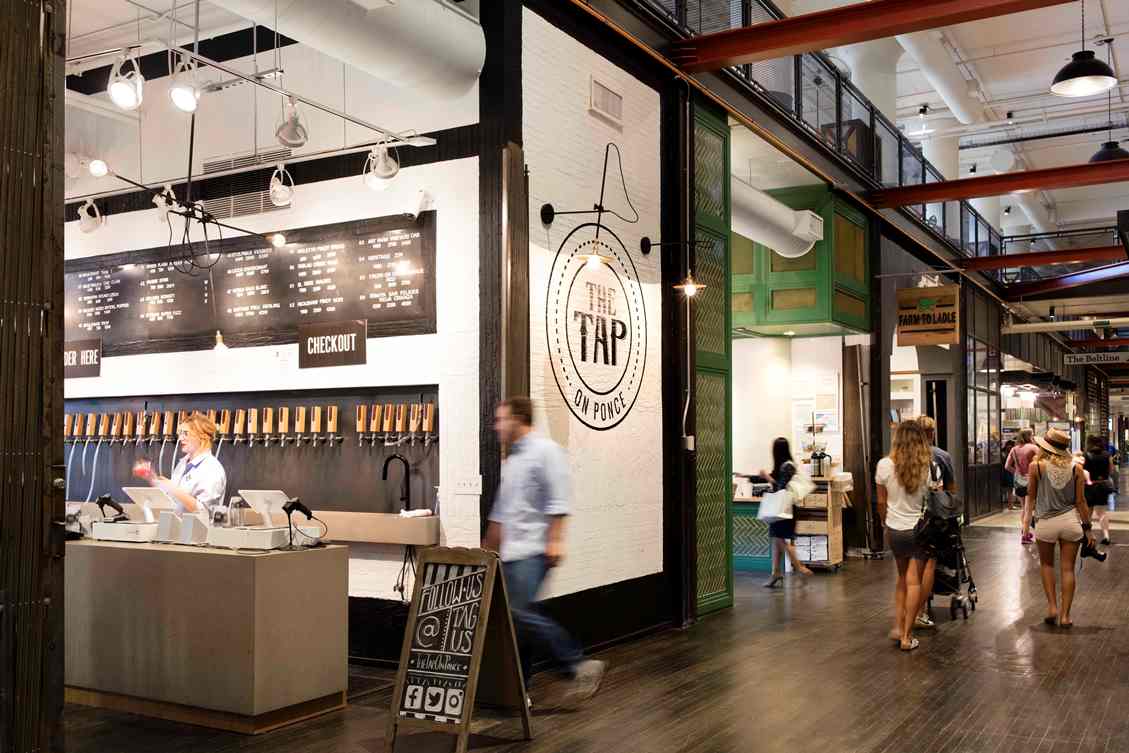 Its opening was so eagerly anticipated that Travel + Leisure included Ponce City Market on its list of “The World’s Coolest New Tourist Attractions 2014.” The project was also recognized by the National Trust for Historic Preservation for its part in moving “Atlanta forward while maintaining and emphasizing the city’s unique history and culture.” 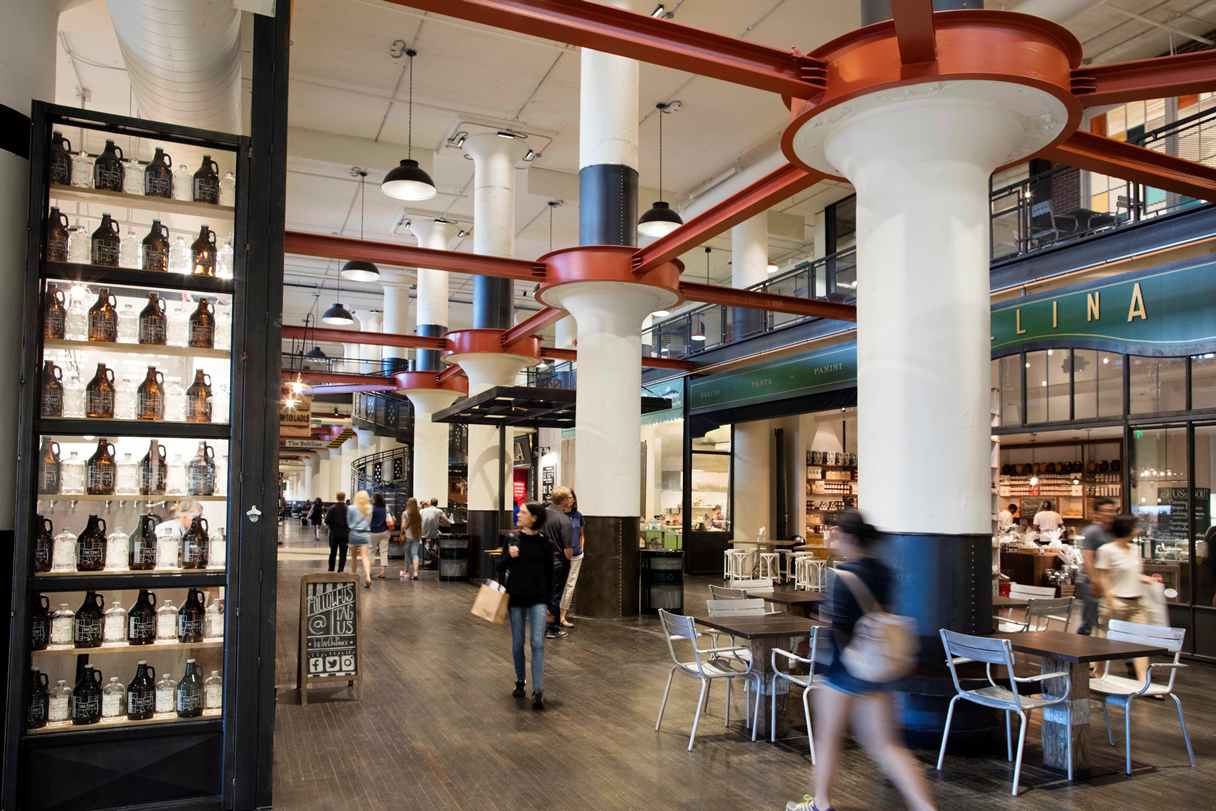 Named for the street on which it is located, Ponce de Leon Avenue, Ponce City Market’s Central Food Hall is designed to allow local artisans, chefs and culinary purveyors to set up shop with the intention of showcasing the distinctive flavors unique to Atlanta.

It is the quality of chefs that makes Ponce City Market stand out.

“The caliber of the chefs in Ponce City Market is exceptional—the Central Food Hall features chef-driven restaurants alongside local purveyors,” Phillips says. “It inspires an environment in which guests can explore and have a different experience each time they visit.” 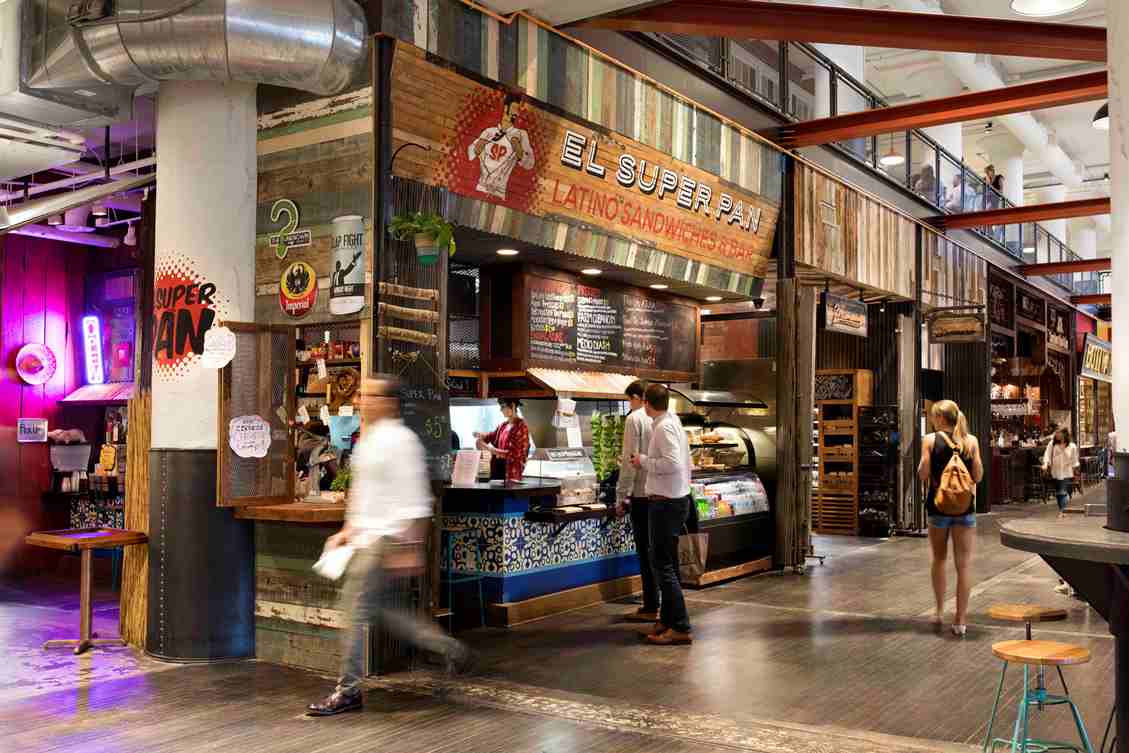 “Many of the retail items are curated from the chefs themselves,” Phillips continues. “Guests can shop around for the best spices, fresh seafood and sauces imported from Latin America. Because of the variety of cuisines offered, shoppers can find items that aren’t available at their local grocery store. Our goal at Ponce City Market is to surprise and delight our guests with an engaging and evolving experience.”

In one of the nation’s fastest growing cities, it feels like another neglected warehouse has been turned into a cool creative space every time you turn around. The thriving culinary, craft beer and food truck trends served as inspiration for Avanti Food & Beverage, a food hall where local vendors (most of whom started in a food truck) operate out of modified shipping containers in collective space.

Although it is housed in a historic building that dates back to the late 19th century, Avanti (formerly called Avanti Print and Graphics) features a distinctive blend of historic charm with a contemporary urban vibe. Guests can eat inside the market or sit on the rooftop deck in front of a view of the skyline so close you can practically touch it. 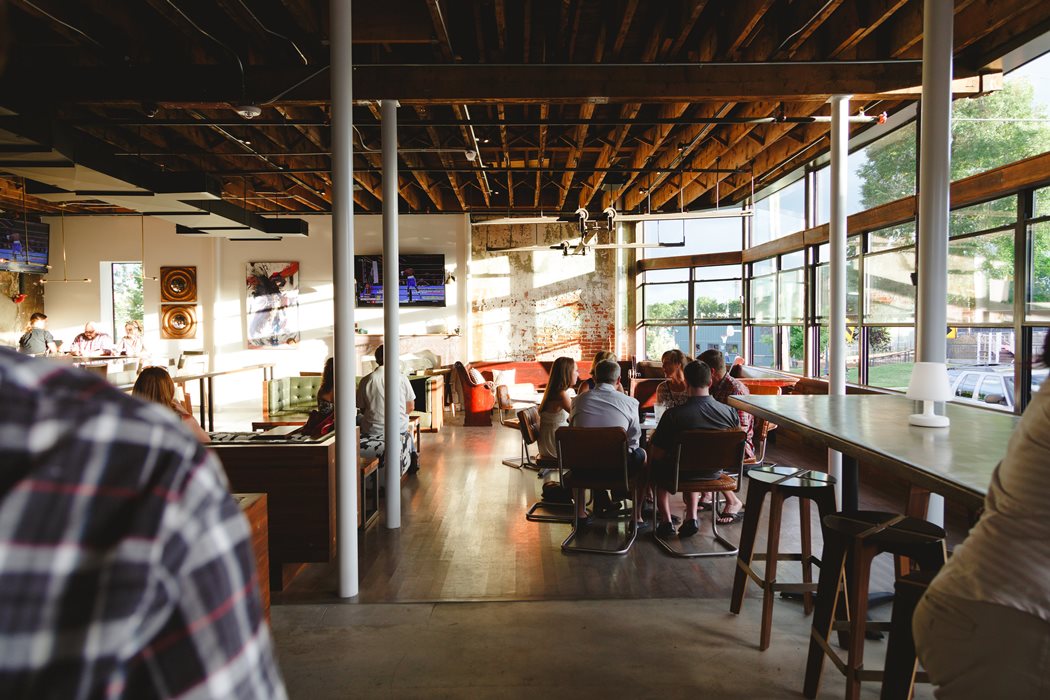 The building has two permanent bars that serve up to 20 local brews as well as classic cocktails and affordably priced wine. With its bars, Avanti offers a not-so-common
food hall feature: cocktail servers who wander throughout the building finding guests no matter where they are located, to take their drink orders.

“At Avanti our goal is to offer affordable food in a fun, approachable setting,” says restaurateur Patrick O’Neill, co-founder of Avanti Food & Beverage. “All the food at Avanti is under $15, so guests are getting high-quality food for an affordable price.”

The space was also designed as a restaurant incubator.

“Up-and-coming restaurateurs and established chefs alike can come and test out their concepts before invest in in a full brick-and-mortar,” O’Neill explains.

Guests benefit from this model as well. The seven concepts rotate out every few years in order to keep the food options fresh and interesting.

In San Diego, Liberty Public Market, which opened in March 2016, has taken honoring a city’s heritage to a new level. The market is located in the Liberty Station neighborhood, which was once the site of the city’s famed naval base.

Operated by Blue Bridge Hospitality and Liberty Station, the 25,000-square-foot venue takes advantage of the California climate with indoor and outdoor space, including 3,000 square feet of dog-friendly patio and several outdoor living rooms and dining decks. Inside, the culinary options are both global and eclectic.

“Liberty Public Market represents a truly locavore experience, with nearly 30 local artisans and purveyors representing the best that San Diego has to offer, including an old-fashioned butcher, a locally caught seafood station and an in-market restaurant that pulls its daily offerings from the market’s vendors,” Spatafore says.

The restaurant, Mess Hall, under the direction of Executive Chef Tim Kolanko, offers a view of the original mural works that depict the city’s naval history, from the inception of the base to the start of the Cold War.

As to why food halls resonate so strongly with customers, Spatafore attributes creative synergy as a driving force.” This return to sharing and community has grown parallel to the rise of customers seeking unique and local experiences to discover,” he says. “Exploring through their palate, customers are able to taste locally created, grown and sourced fare, in a curated, accessible environment.”

Omni Louisville Hotel features a dynamic 20,000-square-foot modern urban lifestyle market connected to the lobby of the Kentucky hotel. Transforming Liberty Street into a pedestrian thoroughfare, the market will serve as a community gateway for hotel guests and locals alike, inviting the neighborhood in with the smells of freshly brewed Heine Bros. coffee, baking bread and fragrant fresh flowers.